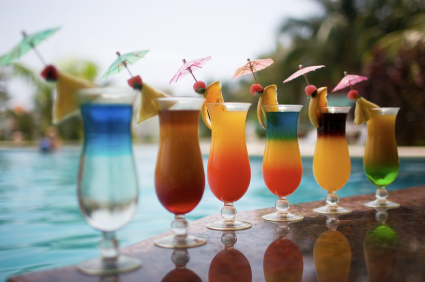 If you want to plan a holiday party to remember, you may want to consider creating a Hawaiian themed luau. With a Hawaiian themed winter party, you can bring your guests a taste of the tropics. One essential feature that is needed at any luau party is a Tiki bar. While Tiki drinks are fun and festive, they also have an amazing history. Let’s look back at some of the highlights in the history of Tiki drinks.

The history of Tiki drinks can be traced back to the 1930s, when a man named Don Beach opened the first Tiki bar in Hollywood, California. Don was inspired by the Polynesian culture that he had experienced while travelling in the South Pacific. To recreate the flavors that he experienced in Hawaii, Don mixed rum with fresh fruits, such as pineapple and guava.

While the invention of the Mai Tai is a contested subject, many people attribute the first true Mai Tai to a bartender named Trader Vic. While working at his bar in Los Angeles, Trader Vic was visited by a group of friends from Tahiti. Trader Vic combined pineapple juice, liqueur, and light and dark rum to create the ultimate Tiki cocktail.

By the 1950s, airline travel had made the Hawaiian Islands more accessible to visitors from all over the globe. During the 1950s and 60s, Hawaiian culture became very popular in movies and magazines. Tiki bars started to appear all over the United States, signalizing the rise of this cultural trend.

To get started on preparing for your next Hawaiian luau, get in touch with Professional Bartenders Unlimited of Tucson. Whether you would like to rent bartending equipment, or you are seeking a professional bartender for your party, we will be there to assist you. Call us at (520) 721-1577 to learn more about how we can help you plan a party to remember.